Couple of more finishes for the year.

I'm adding two more finishes for the year to report for the works in progress challenge.  I have two banners I hope to get done tonight if possible or definitely tomorrow.

This first quilt is called Marbles and is for my nephew.  I made this top in May 2008 and it just sat there without a border.  It was supposed to go to someone else and when that fell through, I had not interest in working on it.  Then, I pulled it out and realizing that it was almost twin size that it would be perfect for a family quilt.  I now have 4 of 6 quilts that will go to this family.  Need one more for a great niece and a great nephew. 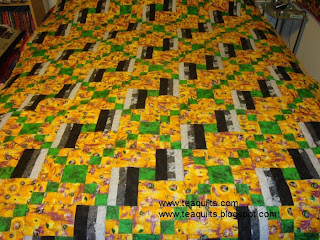 This one I started as a mystery quilt in a yahoo group in 2006 and finally decided to get it off the UFO list.  It's quilted on my home sewing machine and it took me almost a week to get it completed.  The colors are a lot richer making for a nice autumn quilt. 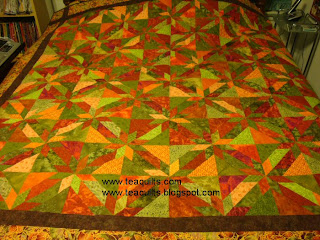 I have a few quilts to share.  I've been quilting on my DSM and got some projects off my UFO list before year end.

The American Friendship Round Robin was organized through Teas Snowman Swap Group in 2005.  I made the center based on pattern Stars and Stripes by Shannon Williams.  I then sent it to Yveline Mignot in Florida.  She made the flag panel into a stamp by adding white border.  She then appliqued all those half circles and the final black border.  It was then mailed to Barbara Foster in Missouri who added the applique stars and hearts and the blue spacer border.  It then went to Annette Hester in North Carolina who added the "God bless America, Land of the free" spacer and the rail fence border.  However, adding the eagles made it truely American.  It was then returned to me in Missouri and I just had to add something more to reflect the USA theme.  I made 50 friendship stars and put each state's two-letter abbreviation in the center.  In the spacers on the sides, the fabric has USA  tossed about in various text sizes.  This one quilted up nicely and I am anxiously awaiting for Saturday so I can show it to my small quilting guild that meets monthly in each others homes. 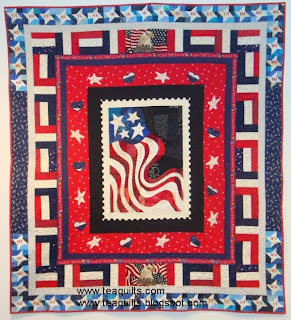 This quilt is for a 2nd cousin.  The coloring in photo is horrible because the fabrics are really pretty.  This quilt was made from the Wicked Easy Quilt pattern that was free on the internet a few years back.  Its twin size and just something for her to take when spending the night with friends. 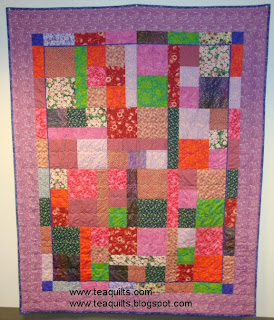 I've taught the Exploding Star class a few times and this quilt started as my class sample.  I thought I was through teaching my final star class in June so I completed the top.  However, a few months later, I got a contract to teach this class in April 2010 (I know, that how it works.)  So, I'm making a new class sample quilt (actually two as I'm creating an expanded version of the pattern) so my UFOs grew here instead of decreasing. 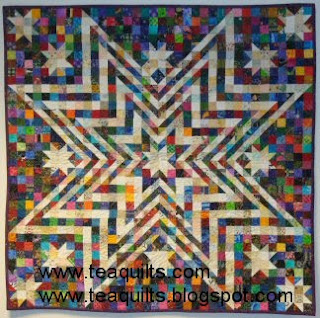 I'm not a huge fan of fabrics that typically make up baby quilts, unless of course you add them into a scrap quilt. My friend's step-daughter had a baby last Tuesday when she was unexpected induced. I thought I had more time to make a quilt, but it quickly ran out. I made this quilt in a couple of days for the new baby boy. I picked the star fabric at a LQS last month and then picked the two coordinating prints to go with it. Not your typical baby quilt, but it will do.  Quilt is 40" square... 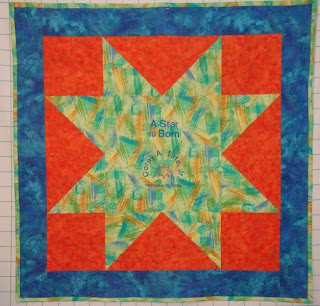 I have been quilting like mad. I have a quilt for a second cousin made, just need to sew two sides of the label. Ive also quilted the American Friendship Round Robin quilt. I'm working on hand sewing the binding and label. In addition, I have quilted a mini exploding star quilt I'm calling Star Explosion. So come back as I'll be posting pictures of these quilts this week.
--------------------------
Type-u-later,
Tea in MO
http://www.teaquilts.com
at 12/07/2009 01:35:00 PM No comments: