A great big HELLO from me to you.  I truly thought retirement would mean that I'd have more time to devote to my social media sites, especially my website and blog.  However, I seem to use Facebook and some YouTube, but am not coming to the blog like I wish.  Again, I'm promising to post more.  However, you can also follow me on my other media sites:

Earlier in the year I wasn't very busy with actual quilt making, but lecturing and providing workshops.  I'm now Vice President of my quilting guild and that took a lot of my time to schedule programs for 2016.  Also, we had a quilt show as the end of September that I hope to post video footage on YouTube.  I also taped me sorting through some scraps and will get that video edited as well for uploading to YouTube.

In October I had to buckle down and work on the commissioned t-shirt quilt I started in July of this year (probably my previous post) as this is a Christmas gift for the buyer's hubby.  It's called Jason's Obsession and is 95" square.  I'm super glad that I got this one completed. 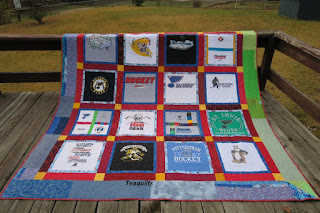 Since I was in the t-shirt finishing mode, I decided to finish I Just Want to Dance 2 t-shirt quilt as well.  I started this one in February 2015 and put in on the back burner as my "life" took over and eliminated my quilting time.  I have a close up shot so you can see the setting fabric.  I love this print. 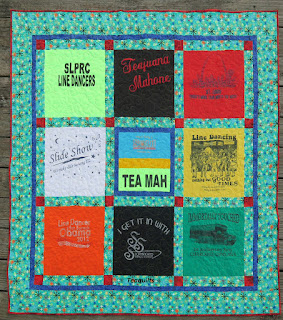 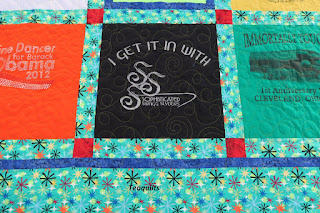 Lee Etta comes to the Scrap Quilting Club meetings with a Quilt Carry Bag from the booklet "Jelly Roll Quilts" and everyone loves it.  I decided to make my own version.  Instead of cutting the jelly rolls at the stated measurement, I left them long to carry large size quilts.  In addition, I used fabric straps instead of webbing, fabric strips instead of cording, and Velcro instead of snap tape. I used any previously cut 2.5" green strips that I had in my stash.  I also added the outside pocket to I can just take in a few dollars and keys to meeting when I used this bag.  Basically, I used what I had at home.

Since I made the first bag, I decided to make some more.  I made two of the Tote-Ally Yours tote that was featured in Quiltmaker May/June 2010 magazine. They have outside and inside pockets.  Yeah! I love, love pockets to sort my items. 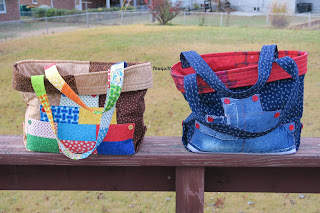 I worked the pattern as described in the first tote.  I plan to give this one to my mother for Christmas; she loves brown and I love color so I mixed the two.  I figure it will be a great tote for her to take her belongings to church and bright enough not to be left.  Of course, everyone will know that it belongs to her. 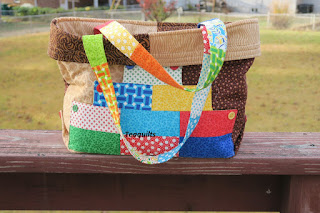 On the second version, I made some changes to the bag and it took my longer to make this one than the other.  I used some denim I purchased from a estate sale.  I don't visit many estate sales, but I purchased the material knowing that I'd make a memory bag.  I sketched a template for the pocket so I could cut a solid pieces from the fabric scraps I used on the back of Jason's Obsession (quilt above).  Since I love all things bright, I decided to pop the denim with red and I'm very glad I did.  I also added interfacing on the lining to give the bag more body and to stabilize the inside pockets.  I used red accent thread on the outside pockets for another pop of color.  I had so much fun with this version. 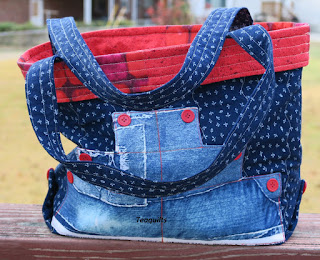 Since I was making bags, I decided one more wouldn't hurt.  I've been meaning to make this bag for a year.  It was a guild's special project.  The Back to School Grommet Bag can be found on www.modabakeshop.com.  It is a very quick bag to make and I used scraps I purchased from a sale of quilting goods of a guild member that past last month, Beverly.  The original pattern uses charm squares, but Beverly had 3.5" x 16.5" strips already cut so I used those. 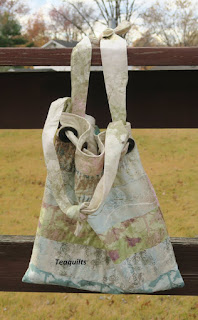 Beverly also had a few pieces cut to make seven of these block units.  As I was going through the scrap bag, I noticed she had some scraps that would match the ones she'd cut.  After I depleted the scraps large enough to cut into these shapes, I raided my stash.  I plan to make this one a charity quilt name Beverly's Mix.  I still need to find something for the borders but I was motivated to get the center pieced. 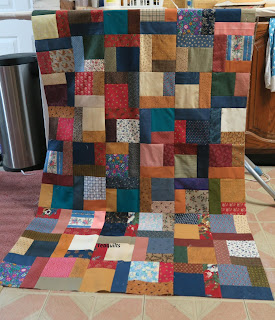 This is the finished top from the Scrap Quilting Club's yearlong project.  I only had four rows completed and it is due next week.  I actually got four additional rows, setting, and borders completed in ten days!  The original patters in in Moda Bake Shop and was a sampler distributed in weekly installments (I can't remember the name right now).  We worked on this project by the month, with participants being able to modify up to two rows.  I modified the 4th and 8th rows.  When I got to the border, the quilt was not wide enough so I elongated the side borders but left the top at the original size.  Then, I didn't like the top border crossing over the side borders so I made corner blocks.  Whew!  It was a chore to get done, but I adore this quilt. 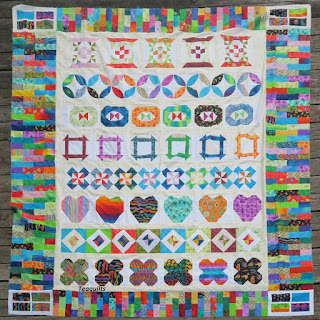 Here are the left over blocks I would have used in the top and bottom borders.  Maybe I will put them on the back of the quilt. 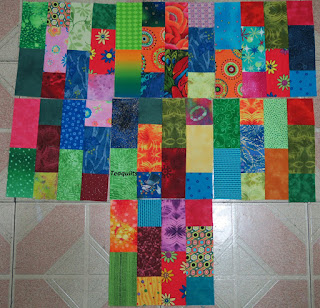 If you are still here, I appreciate you! :0)  I'm in the process of major overhauling my home.  Come January I will become an official long armer!  I need to switch out two rooms which also means I have to pack up two rooms, storing the items because I may as well paint while I'm at it!  Wish me luck and hopefully I'll return soon.