I've had a busy week.


I finished Fantasy Flowers Round Robin  and Treasure Hunt quilts this week.  On my design wall floor this week is three quilts that need binding.  The top one was quilted by Sandy, a long armer, and the other two were quilted by me yesterday on a friend's Tin Lizzie.  So my job this week is to get binding on them and pin baste another quilt. 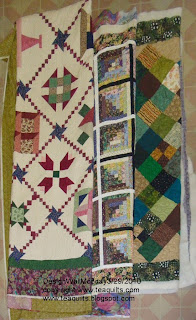 This quilt started as a round robon on Teas Snowman Swap Group which is now closed.  As I planned for the group to close we decided to have one last round robin before ending. 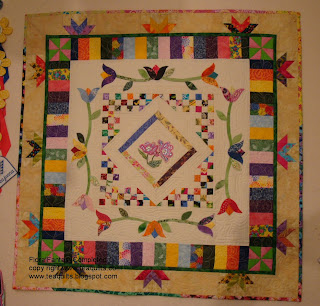 I pieced the center on June 24, 2008.  The center flowers were stitched on my embroidery machine and uses Angelia fibers as part of the stitchout much like an applique.  I then added the border frame.  Since the center could be up to 20" at start, I then set the entire block on point with 9-patch triangle corners.

The Scrappy Tulip Border was made by Debbie Spillman in North Carolina on August 2008.  I appreciated that she kept to the scrappy flower theme I'd started.  The tulip buds are 3-D.

Then in September 2008, Pamela Heggie in Michigan added the Pinwheels and Scrappy Strips border.  Pamela also used scrap fabrics of which most of them have flowers or floliage.

The quilters did such a terrific job that I didn't need to add another thing to the top.  I machine quilted it and then added a scrappy floral binding.

I'm still getting back quilts from long arm quilters.  I still have two more that I'd like to get back by this weekend.  This one is called Treasure Hunt because I used it for a vendor shop hop at our quilt show last fall.  I actually have a smaller quilt too as I was going to make it fit a queen size bed and then changed my mind.  The smaller quilt does not have borders and I don't have a plan for it yet.  I really like this quilt for some reason; maybe it's the larger squares or the secondary design that emerged.  Anyway, it's one more for my lectures in April.

I kind of like how I photographed this quilt on a counter.  When they are too large for my design wall, this just may be the thing to do.  Even better is that I can use the kitchen counters instead of bringing them to work during the cold and/or wet weather. 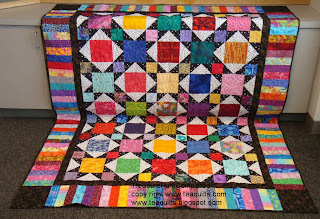 I've had a very busy week.  I posted pictures of my Valentine Miniature (also shown on photo below) in it's own post.  This week I finished "Just String Series: A Big Star" quilt which also has it's own post.  In addition, My Quilting...Computers and the Internet lecture was a big hit with the guild.  I can say it may have been boring at the beginning for long time computers users.  However, when demostrating how to use the computers for organization and software programs quilters can use, even if not designed for the craft, I got their full attention.  My week also included 3rd Saturday BOM and attending two quilt shows.  I had a lot of fun, but now I'm tired.

My design wall doesn't include everything I worked on this week.  I also put borders on two tops and pieced the center of another.  What the design wall does show is a round robin quilt I'm quilting.  I'm working on the final border.  I'll give more information on this in a separate post this week when it's completed.  The other project is a quilt as you go technique for string blocks.  It's another project for my scrap quilting club which starts this Saturday.  By the way, there is a quilt shop hop in the metropolitan greater St. Louis area this Thursday through Sunday. 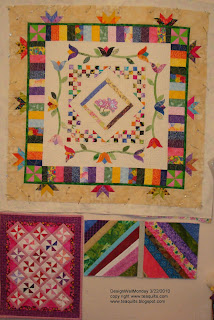 I have received another quilt from the long arm quilter, Sarah.  It's part of my scrap quilt lecture and I just wanted to show it finished instead of as a top.  I have a few lectures coming up and quilts makes much more impact than just tops.  I just finished sewing the binding on it an hour ago.  Now, I'm waiting on 3 more quilts from 2 long arm quilters.  These girls are late getting them to me and I'm a little bummed about that as it's playing havoc with my schedule.  What can I do... 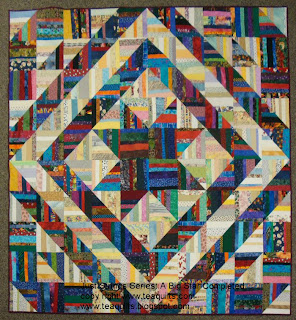 ere is my miniature quilt I finished last week but could not post.  The pinwheel blocks are made from leftovers from the "Love is..." border.  The quilt measures 16" x 20".  The quilt actually tied for 3rd place with 2 other quilts.  I was so happy that my little piece of work paid off.  To quilt it, I first stitched in the ditch to stabilize it.  Then, I used my embroidery machine to quilt little hearts in strategic areas.  I have a little free motion quilting in the last border to help keep it flat.  I love my little "Valentine Miniature". 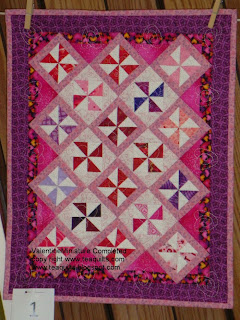 Here is a collage of all the challenge quilts.  Click the photo to enlarge it.  The 2nd quilt in the 2nd row won 1st place and was made by Debby Hughey.  Go girl! 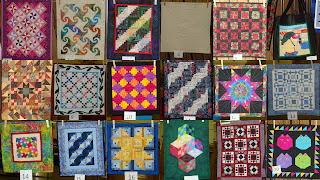 I have quite a few topics to upload so this is the first in a series.  Have you seen this very funny fabric? 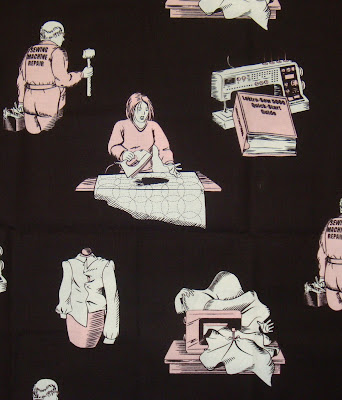 I've Been Locked Up

No cause for alarm.  I've been locked up for MDA.  If you'd like to donate to Jerry's Kids, go to MDA's website using this link.

My fire department is have a fund raising drive.  Any amount you donate is greatly appreciated.

I had a full week.  My mom had a birthday and we planned a large family dinner out on Tuesday.  Then I prepped for my quilt guild that rotates meetings in our homes.  It was my turn which meant cleaning up and cooking.  I even tidied my studio!  It's amazing what having company can do to motivate you to do something your have been ignoring.  I did finished sewing the blocks for the Trip Around the Scrap Basket class I taught at retreat in February.  And, I finished the "Love is..." quilt which is the only photo I have this week. 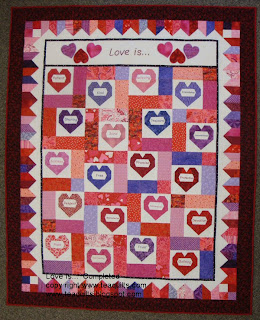 In addition to above tasks, I've been working on a presentation I'm giving this Thursday at the guild.  The topic is using the computers in our quiltmaking which will explore internet usage, organizing personal files, photos in quilts, creating lists in Excel and Access, and some other stuff I can't remember right now.  This should prove most interesting.  I'm sure some will be overwhelmed and those using the computers daily will want more.  I had to gear it to the beginner/immediated level of computer user as a lot of guild members do not use computers or are not online...yet.  I hope to convert a few with the benefits of the quiltmaking using computers.
For more design walls, visit Judy's site.
--------------------------
Type-u-later,
Tea in MO
http://www.teaquilts.com
at 3/15/2010 08:31:00 AM 5 comments:

I have had a busy week.  My husband FINALLY got a job after being unemployed 15 of the last 18 months!  Exciting but it also rearranged my week.  His car has needed servicing but since he wasn't working, it wasn't a priority.  So, when he got the job I had to take and pick him up from work.  I had to get up at 4:30 a.m. each day, arriving home at 6 pm each evening (also picked up my daughter from work.)  I was so tired that I was falling asleep from 6:30-10:00 each night.  Awake from 10pm-1am and starting the process all over again.  I HATED it.  I decided to take today off from work and had his car towed in for service.  I'm praying they get it running today so my normal week can resume tomorrow.

I did finish my Denver Log Cabin quilt.  I made a separate post for it last week.  In addition, I finished a miniature challenge quilt which I can't show until later in the month.  So sorry...

What I am working on is organizing my scrap quilting club.  I'm making quilt tops (from fabric donated to me) for charity as I make class samples.  I made enough 4-patches for 2 quilt tops I'll be using for the first meeting as demos. 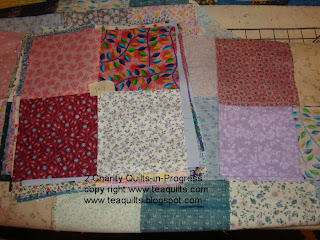 Also for the Scrap Quilting Club's next month project, I'm working on this class sample that will be manipulated a bit. 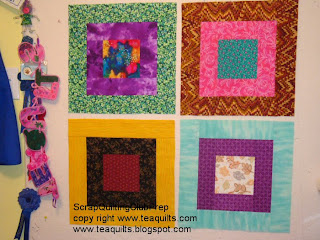 In the process of quilting on other projects, I made one more Mountain Top Block; now have 5. 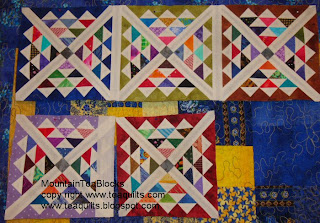 This Denver Log Cabin quilt was started in April 2006.  It has taken me almost 4 years to get it quilted.  I have about 30 quilt tops ready for quilting.  I decided that it was okay to seek professional help.  The top was quilted by Sandy Etheridge.  She did a wonderful job with pink feathers in the pink areas and blue feathers in the blue areas.  Now, I would not have been able to do that.  I'm so happy with the quilt.  I picked it up Wednesday during lunch and I just finished sewing the binding during lunch today.  Now, if I can get back the other 5 quilts I have out seeking professional help.  I'm trying to get some new quilts for three lectures this and next month. 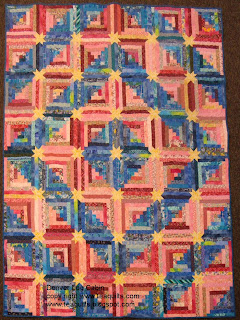 Here is a close-up of the quilting.  She matched the thread so closely that it's hard to see.  She used blue and pink varigated threads. 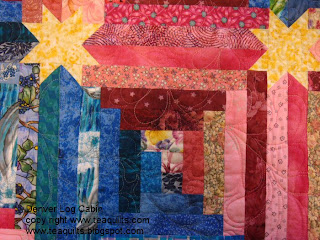 I don't have a lot on my design wall that's quilt related this week.  I've been working on income tax returns for my family, completing 8 of them last week.  I am also quilting my Love is quilt.  I think my machine needs servicing as I'm having problems with tension when free motion quilting.  It will be a while before I take it in as I'm trying to complete some projects for some upcoming lectures in March and April. 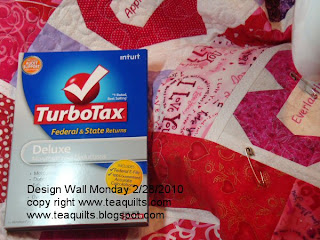 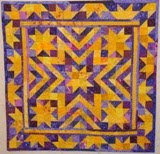