I'm updating this post as I just posted pictures previously. The following quilt is the Covered Bridge wall hanging I mentioned in my previous post. I started in July 18 and completed it July 29. Its 26.5 x 22.5. Again, the designs are by Anita Goodesign. I used a gold cord to cover the patchwork seams joining the blocks. I used a widely space zigzag to attach to the top. Then, during quilting, I i zigzag over it again to hold to backing. I did some strategic quilting in the squares to keep them from puffing too much. In the border, I used my embroidery machine to quilt in a leaf design that I rotated here and there. I'm always asked, "how long did it take to sew the blocks?" Well, this time, I time the machine embroidery and it took 24 hours just stitching the blocks. This does not include ironing, cutting, and hooping time. In addition, it took 8 prewound bobbins where the thread is thinner and thus holds more thread on the bobbin. 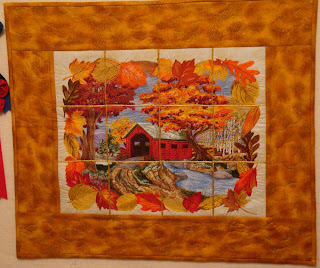 The following Fall Scene is designed by Dakota Collectibles. I did not time this quilt. I started it on July 24 and finished July 30. It is 15.75" square. While not as complicated as the quilt above, it is a nice addition to my fall decorating. 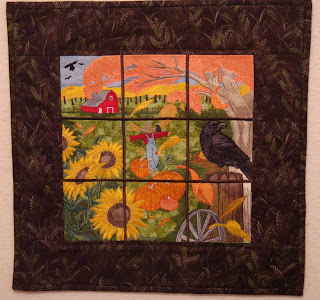 Again, it's been a while since I've posted. I haven't completed anything since my last post. I did attend the John Deer embroidery event. He has some interesting history on machine embroidery. After the first 3 hours of a 2-day event, I got feed up with the event. It was heavily focused on sales, not just his products, but every quilting/sewing tool imaginable. Even to the point of pushing top of the line embroidery machines. Instead of me paying to attend, they should have paid me for my time. In all honesty, I can say that I did learn something but for the price and time, I will not consider attending one again too soon. 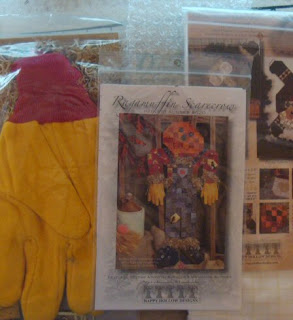 Here is a photo of a scarecrow pattern I have that I'd like to finish before fall. I've only had it a few months in my stash. I'm hoping it doesn't become something hanging around for years. 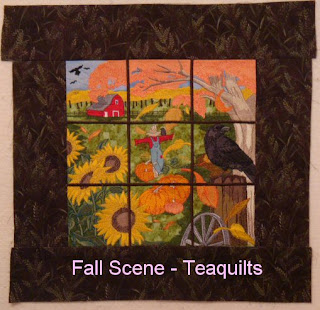 Here is a fall scene I made with Dakota Collectibles embroidery designs. I hope to get this one done by the end of the month. I haven't been slacking, just working on tops but no major finished yet. 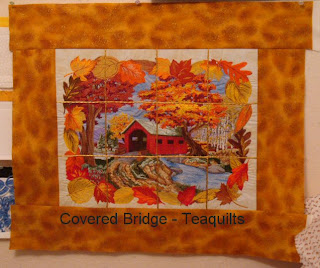 Another fall scene I worked this week. This one is from Anita Goodesign machine embroidery design called Covered Bridge. This is gorgeous. I don't like the 30+ color changes, but it sure makes a difference to the shading in the final result. Hope to finish this one too by the end of the month. 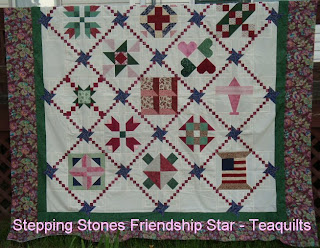 I did piece the quilt top from my previous post. Even got around to adding the borders. I just need to make the back before it goes into my WIPs pile. Not sure what I'm doing with it at the moment. I completed my last week as President of a large guild this month. I'm really excited about that. Now, I just have to plan the Quilt Show being held in September. By the way, the cell phone cases went over really big. I think only one person did not have a cell phone so I suggested they re-gift it or use it for their I-pod.
I also met with a hand quilting group, hoping to persuade them to quilt my DJ quilt. No go. While they admired the quilt, they would not touch it with their thread and needles. Gosh, guess I'll have to start back working on it myself.
I feel like so much is in my head but I can't remember it to type it all. Now I remember that I want to share that my birthday is this Tuesday, July 28th. It's not a big year and I don't have big plans but do enjoy having them...as compared to NOT having them. VBG
Enjoy your week and maybe I'll chat with you soon.
-------------------------- Type-u-later, Tea in MO http://www.teaquilts.com
at 7/26/2009 07:02:00 PM 1 comment:

Even though I tried, life got in the way and I wasn't able to blog for a couple of weeks. First, my mom retired and I attended that celebration. The pictures I took have her hugging someone of flowers and/or gifts in her face area so I don't have a suitable photo to show. The event was nice but the occasion was a God send. I wanted her to retire years ago and am so excited that she finally put up her gourmet chef's hat. On July 3rd, I made this design wall from Sew Many Ways. I used an old flannel sheet that I'd already started cutting for my surface. I had to piece sections together to get the correct measurements. I had to go to two hardware stores to get all the PVC parts but it is well worth it. I haven't used it yet as I'm piecing larger items at the moment. The only change I made to the pattern was to hem the bottom of the sheet, not leaving raw edges. 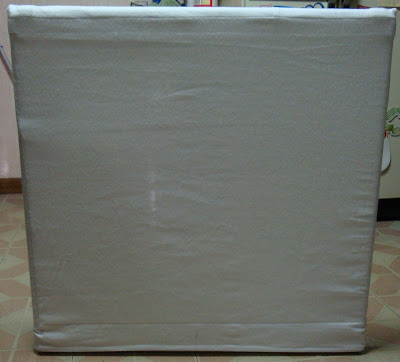 I started this Split 4-Patch quilt for my brother in November 2008, wanting to have it done by May this year. That of course didn't happen. However, while waiting, I found the perfect stripe fabric for the 1st border and binding. I cut about 40 inches of fabric on the bias to make both the border and binding, cutting 2.5" strips. It was tedious but I like the "wave" effect created by this fabric. This one fits a full-size bed but was made as extra cover, not the main bedspread. 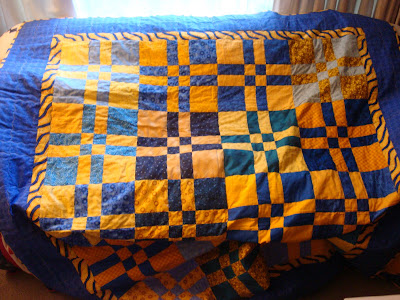 I forgot to mention last time I wrote that I won the guild's optional blocks. I'll probably receive some more at the next meeting so I haven't done anything with them yet. Any ideas, especially for what to put in some of the empty jars? I'd love to hear from you. 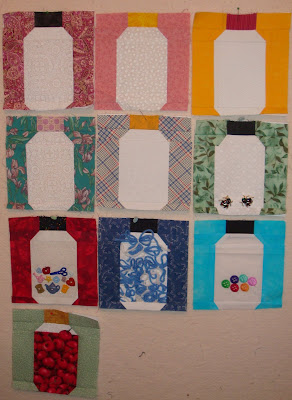 Let's see, what else is going on? I am piecing my Stepping Stones Friendship Stars blocks into rows. Here is a picture I took in 2006. The sampler blocks are from a local quilt shop's BOM. The original setting was to use plain sashing with corner stones between the blocks. I decided upon this setting instead. Made the setting blocks but never pieced them together. I found the pizza box that held this treasure when I cleaned my old sewing room (now storage) this weekend. 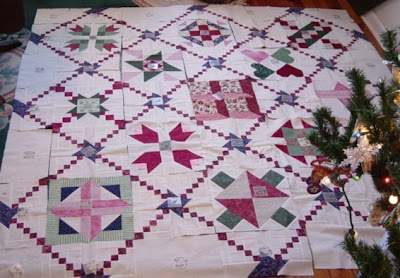 My plan for this weekend is to attend a 2-day John Deer Adorable Ideas embroidery seminar. I've attended one featuring Anita Goodesign in the past and really enjoyed it. I'm looking forward to this prsentation although I can't spend much money. I finally broke down and purchased the Accuquilt's Go Cutter. In addition to the cutter, I also purchased the 2.5" strip cutter and the 8.5" rag square dies. Yikes! I'm hoping to get a lot of scraps cut and to make binding for the 35+ quilt tops that need to be quilted in my UFO pile. If anyone has the cutter, let me know your thoughts. That's all I can think of at the moment. Chat with you soon.
-------------------------- Type-u-later, Tea in MO http://www.teaquilts.com
at 7/08/2009 08:07:00 AM 3 comments: